Before proceeding to Cape Breton Island, which, for me would be the main attraction in Nova Scotia, we had to make a stop in Truro and the Bay of Fundy to watch the tidal bore coming into the bay. It has been on my to do list for many years because the tidal differences in this bay are among the biggest in the world.

Powerplants harness some of the energy created by these huge tides and if you time your visit perfectly together with the full moon you can watch a wave coming into the bay a meter or so high created by faster moving water colliding with the slower moving water. Because of this, planing your visit here could make a big difference to your experince. Tidal schedules are easily found online and are definitely worth a look in advance, and if you’re interested, Truro is the place to go to. 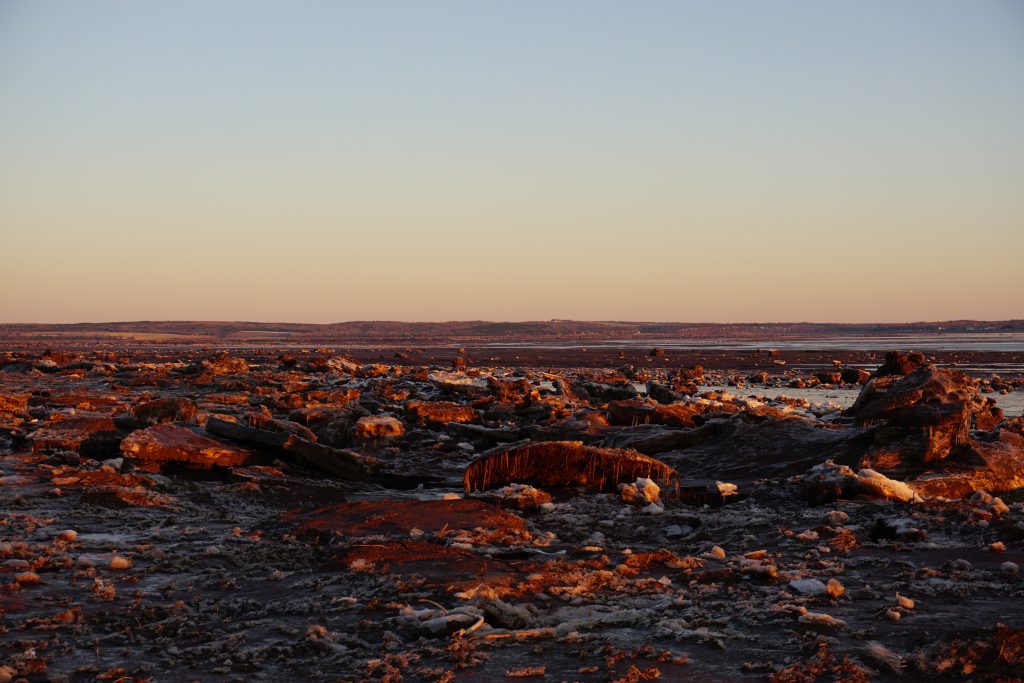 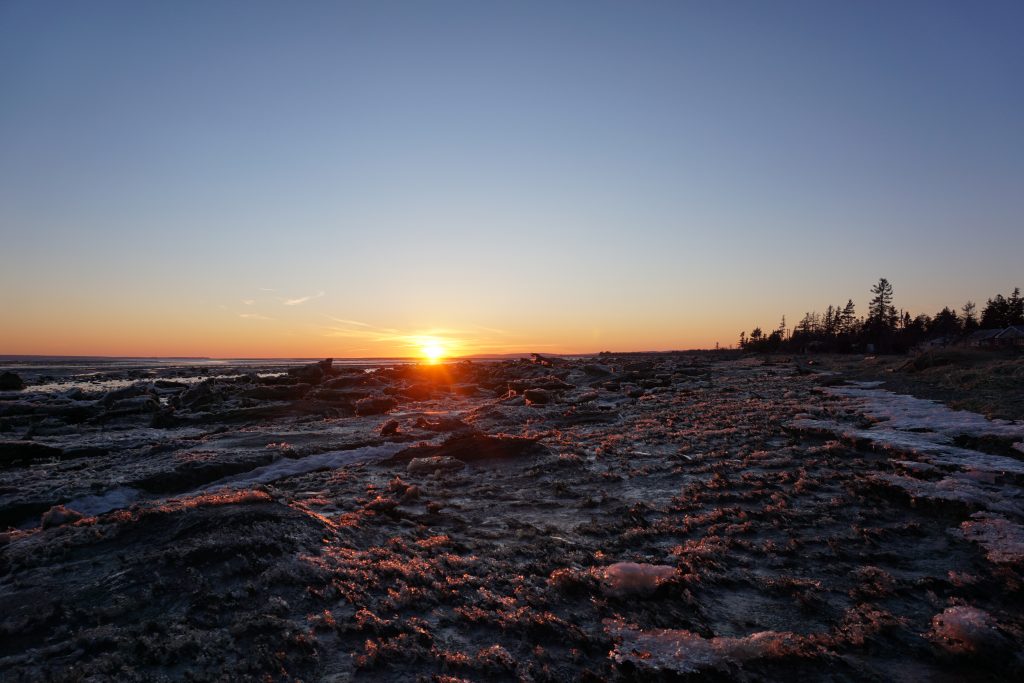 Getting to Truro is easy enough, just take the highway north from Halifax for about an hour and a half and you’re there. We found a nice place just by the water outside of Truro and watched the tide coming and going for about two nights, and truly, the difference between low and high tide were huge! Especially since there was still quite a lot of ice in the bay it was easier to observe the massive amounts of water rushing into the bay. 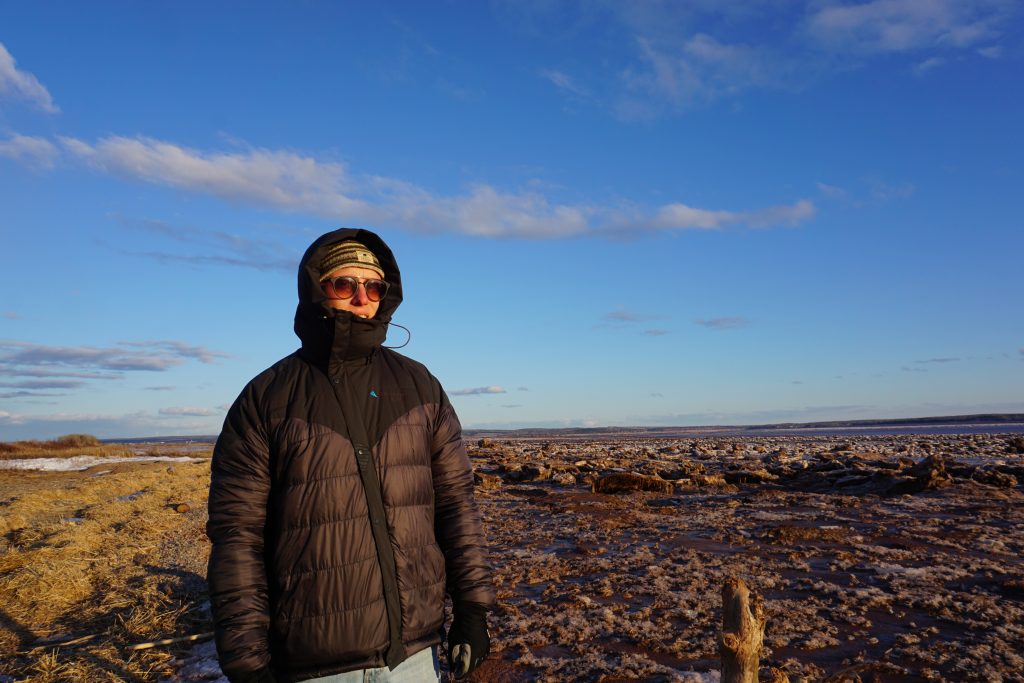 Having seen the tidal bore we continued north towards Cape Breton Island and the Cabot Trail, an approximately 300 km scenic drive around the northern tip of the island where you also pass through the Cape Breton Highland National Park.

To begin with, just coming onto Cape Breton from the mainland was a very nice drive. As you cross the Canso causeway you’re in the southern tip of the island. Choose the western route due north and you will pass beautiful coastline, acadian villages and whiskey destilleries and eventually end up in Chèticamp, an excellent place to begin exploring the National Park and Cabot Trail. If you decide to drive the eastern route north towards the Trail you will pass big lakes, rivers and small communities until you reach Sydney, the second biggest city in Nova Scotia. From there it’s easy to continue north towards Ingonish on the east coast, a equally good place to begin the trail from. 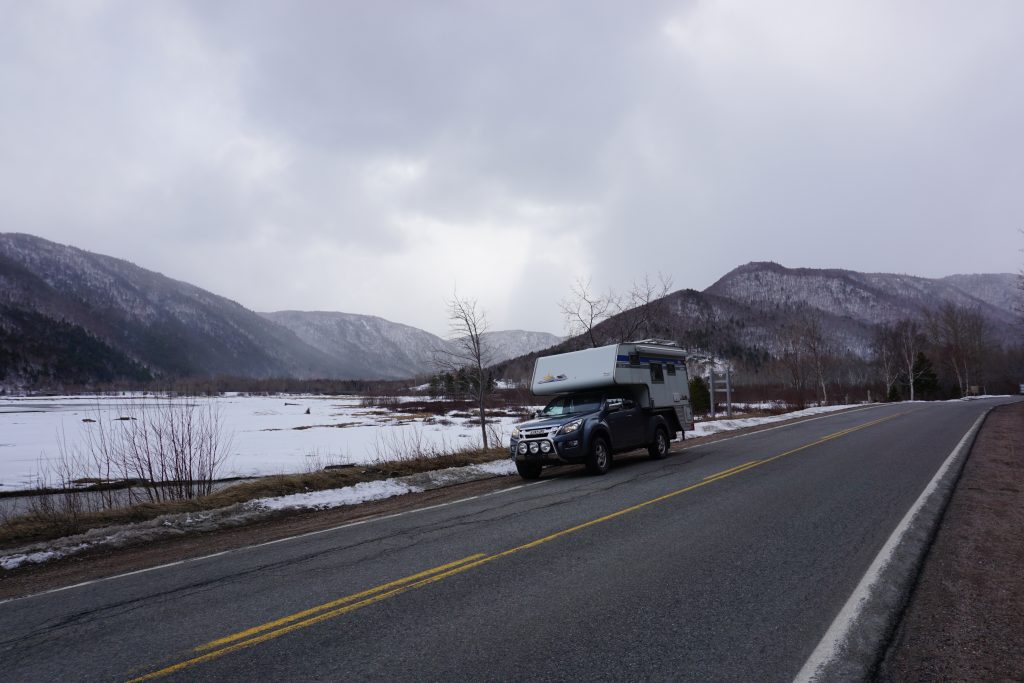 It’s hard to miss the roadsigns leading up to the trail. There are lookout points where you want them as you get closer to the mountains and highlands. The Cabots Trail will give you awe-inspiring views the whole way around, up mountainsides, down steep slopes into bays, over bridges, rivers and drives along beaches. We saw our first Bald Eagles coming into the park, several moose and other wildlife. The highest point in Cape Breton is a little more than 500 meters above sea level, the highest point of the Trail itself will take you up to about 400 meters as it twists and turns around the peaks. If you get the chance, walk the Skyline Trail and soak in the amazing sea view from about 385 meters of elevation. A round trip will take you a couple of hours and is not very demanding to do, though it can be very windy. 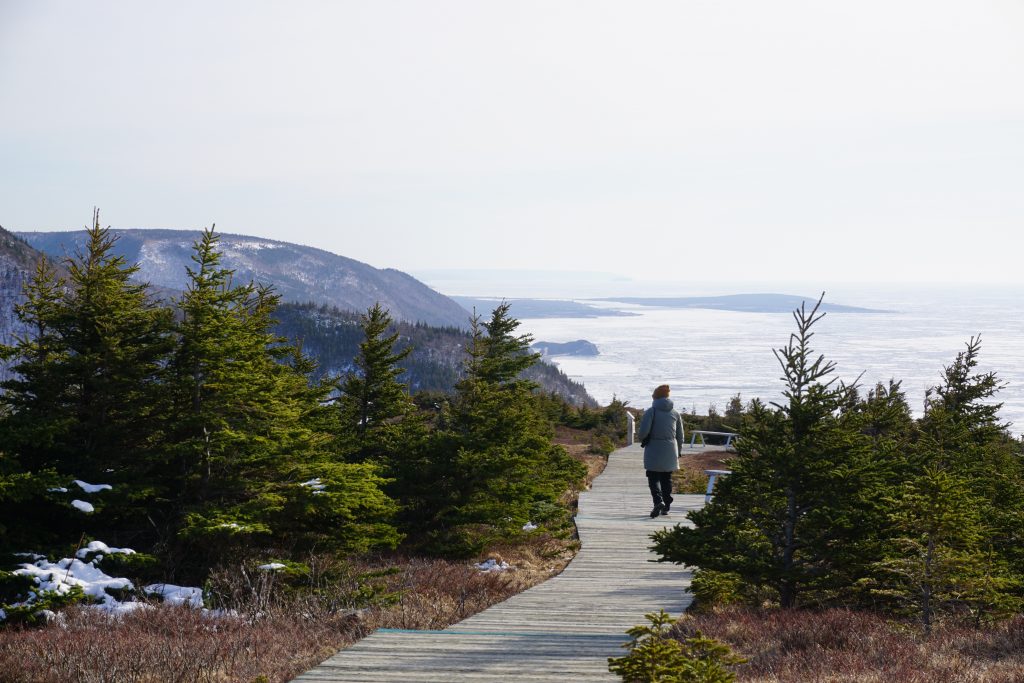 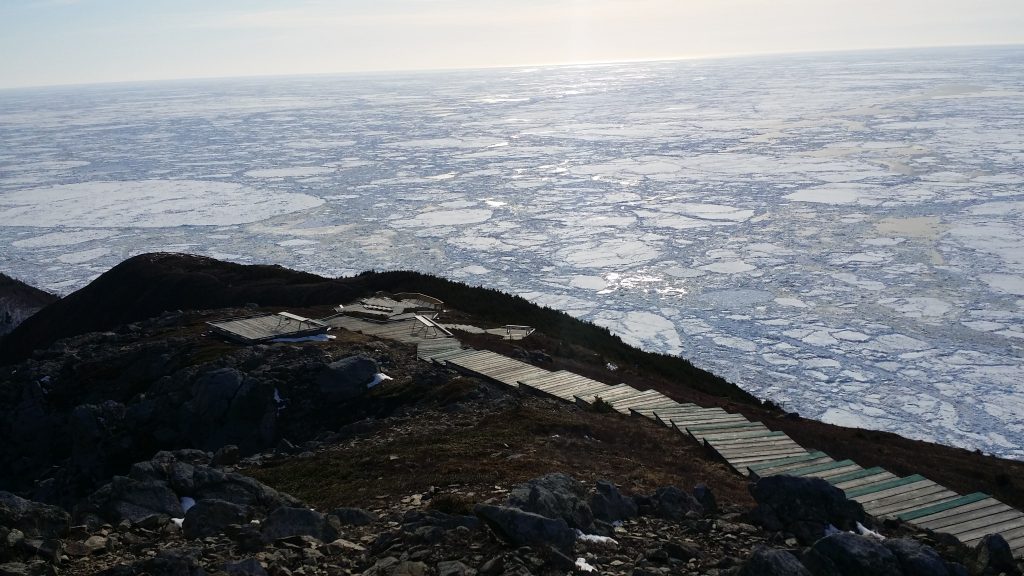 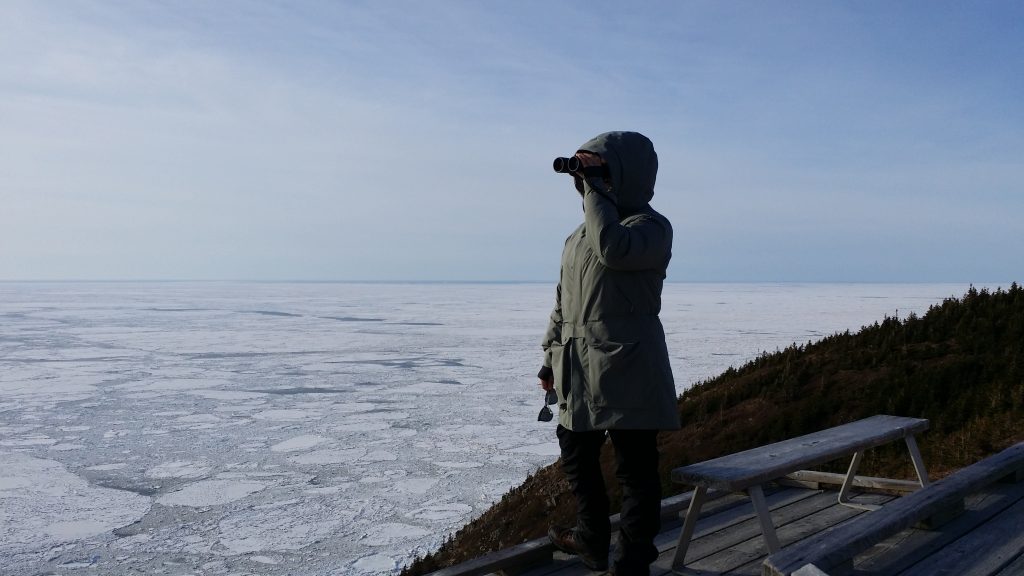 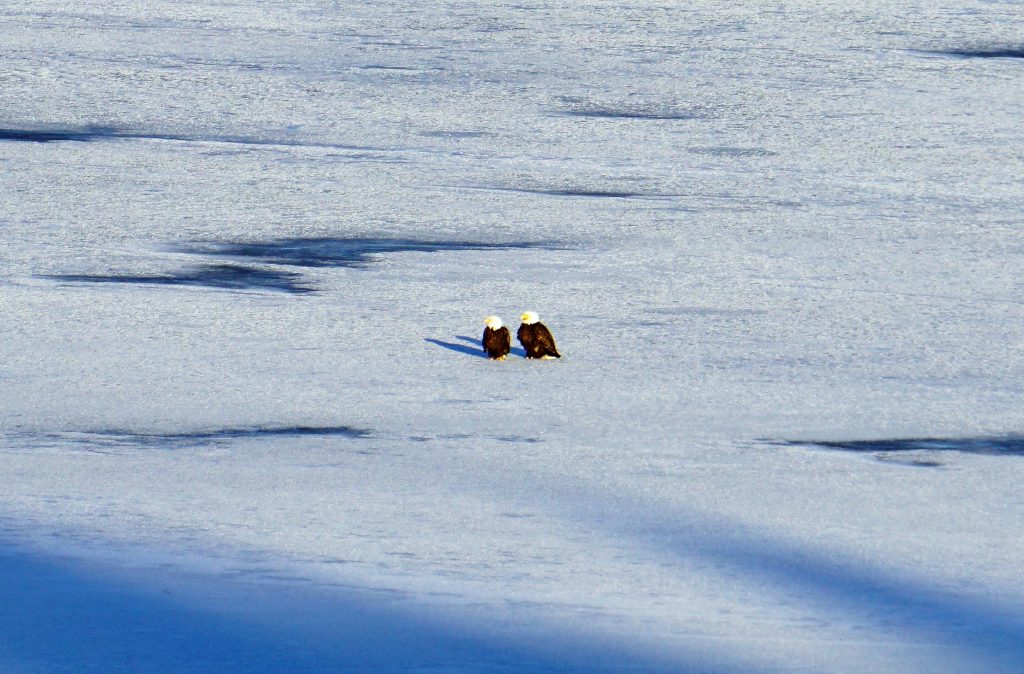 My favourite place in Cape Breton was probably Meat Cove, the northernmost village in Nova Scotia. Once again, we were more or less alone there, but it was coming into the cove that really blew us away. As you make a left in a tiny village called Saint Margaret the road takes you along the rocky, elevated coastline and eventually turns into a dirt road. It snakes it’s way slowly through the mountains until the skies open up and presents an even tinier village with a hidden beach in a cove that is hard to describe. It is easily one of the most beautiful places I have ever seen. To get down to the cove we had to drive down a quite steep road and that was it. We spent the night there, totally alone (as usual). 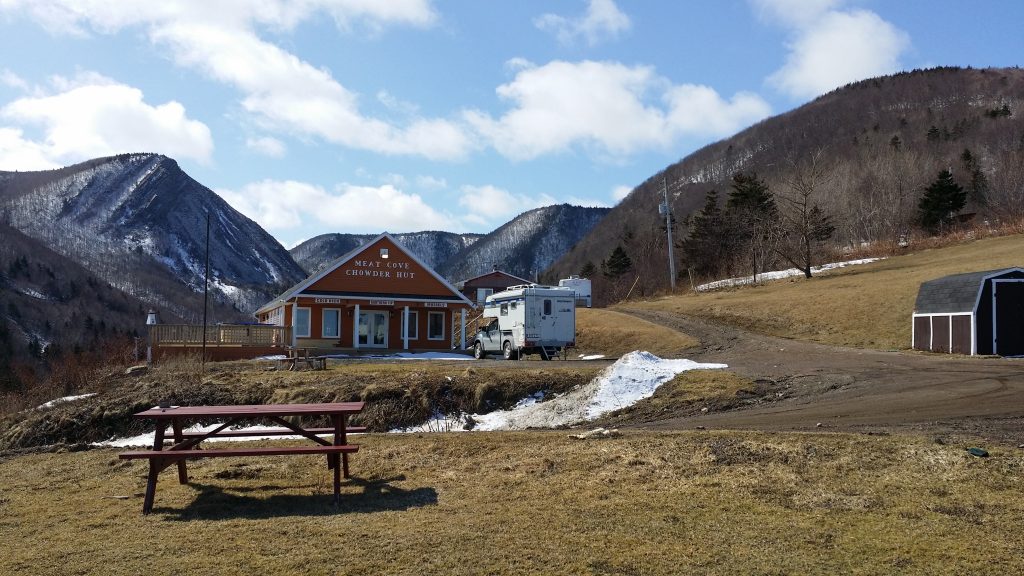 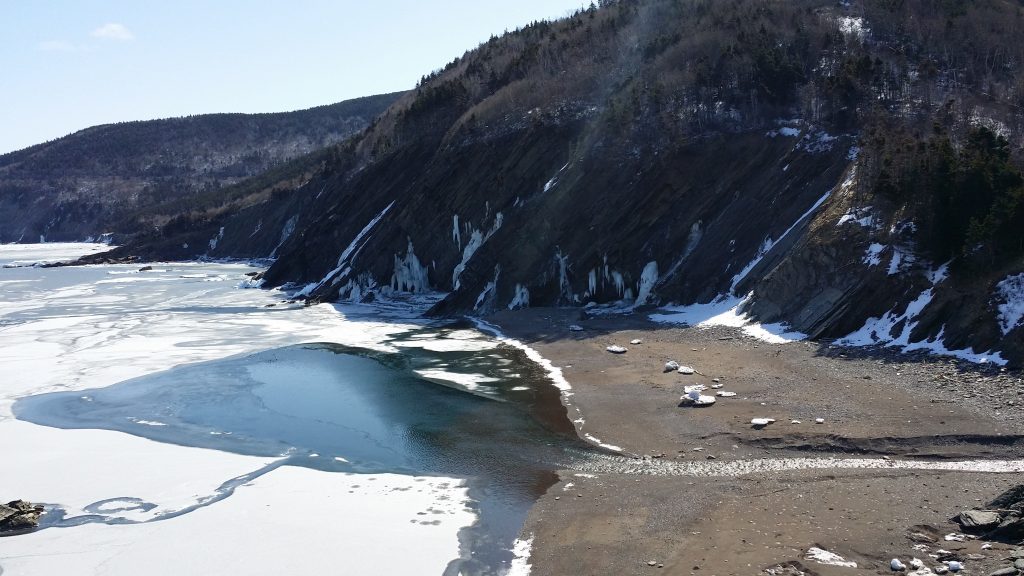 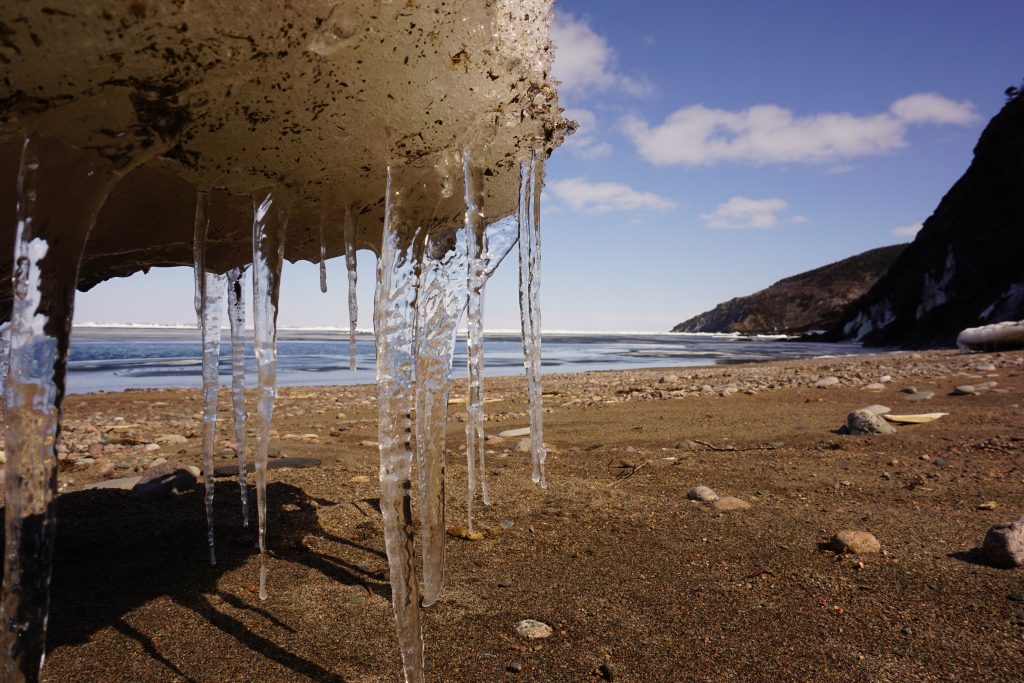 All in all we spent three days on the Cabots Trail. It was enough for us, especially since we timed the weather absolutely perfecly with clear blue skies the whole time. Besides, most of the walking trails were closed anyway due to all the snow, in places the snow drifts were higher than our vehicle. It didn’t matter however, it was a seriously beautiful place and I would easily recommend everyone to do the Cabot Trail at least once in their lifetime. 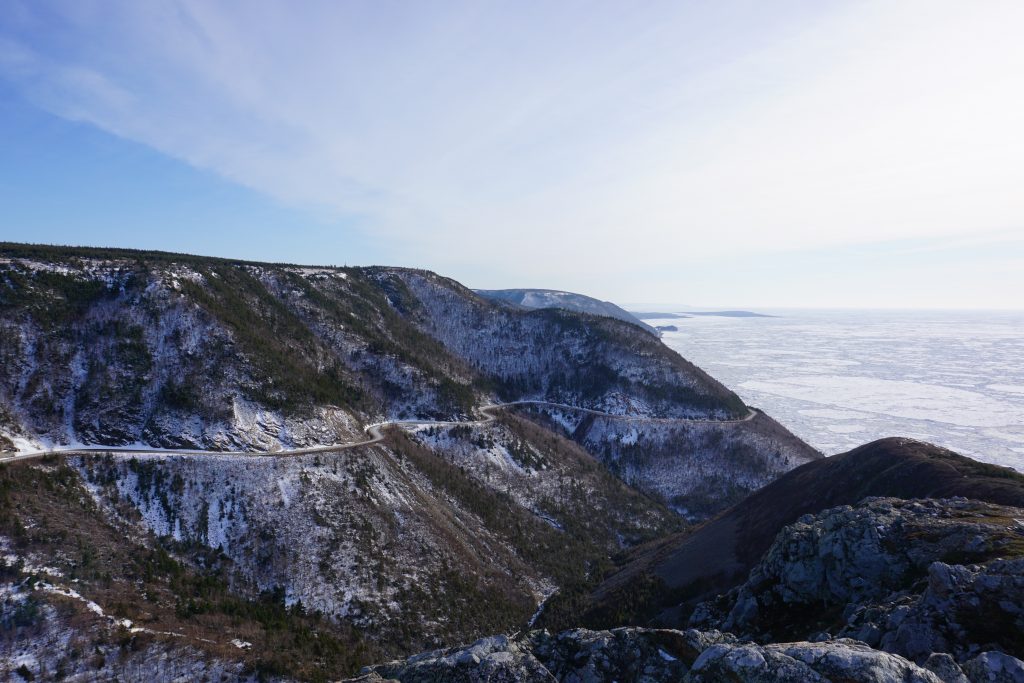 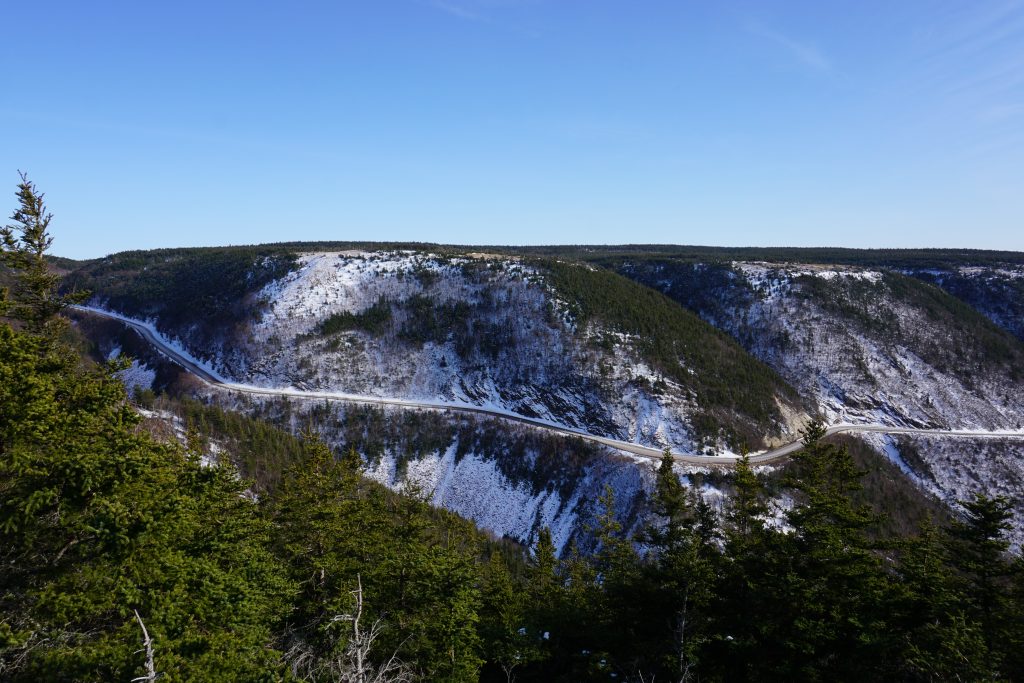 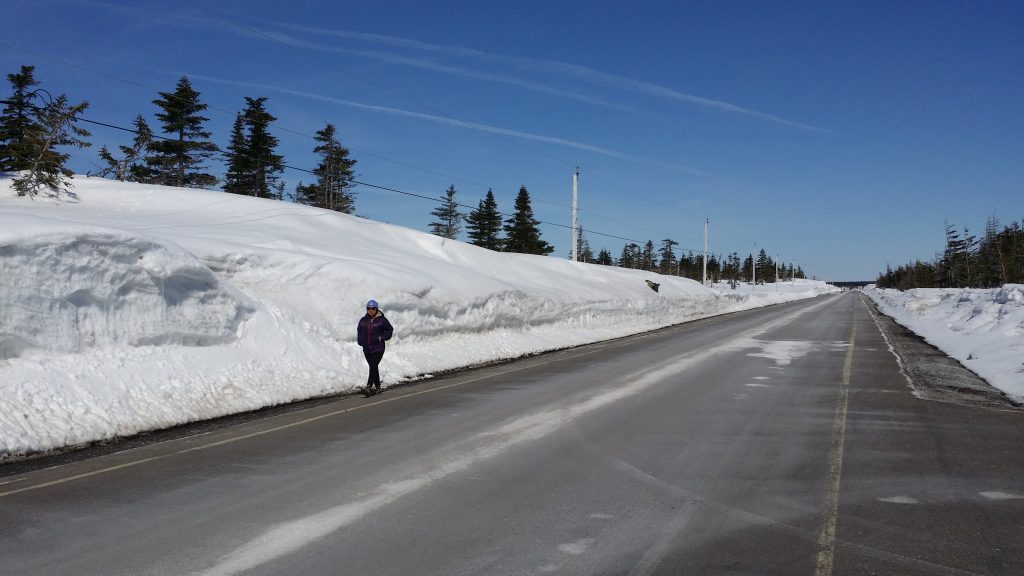 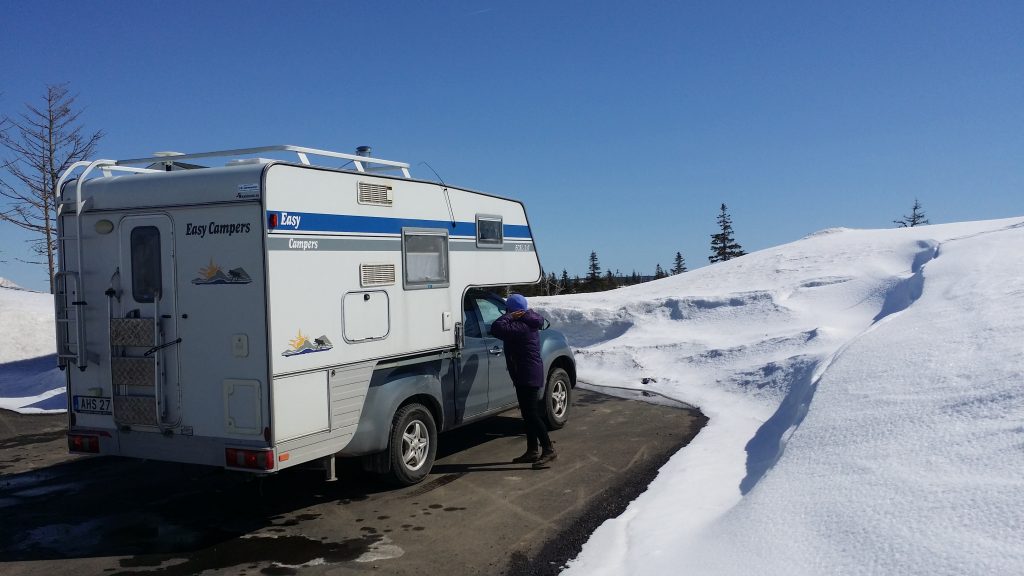 From Sydney, NS, we’ll take a 6 hour ferry across the straight of St Lawrence to our second Canadian province:

3 thoughts on “The tidal bore and Cape Breton Island”